The annual St. Ailbe’s awards ceremony provides a platform to recognise, encourage and celebrate excellence in our school at all levels, in academic, attendance and sporting pursuits.

On Friday 27th May, in the Michael Quirke Physical Education Building, the winners of this year’s awards were announced.

Following on from another successful year, which culminated in our Junior Ladies Soccer team winning the County title, awards for categories ranging from student of the year to Junior Sports awards and Transition Year student of the year to Entrepreneurial prizes, a total of thirteen sets of awards were presented by school Principal, Mr. Ruaidhri Devitt, Deputy Principal, Mr. Kieran O’Dwyer, Parents’ Council representative, Ms. Catherine Heffernan and our Chairperson of the Board of Management, Ms Mary Hanna Hourigan.

First up, were the Junior and Senior sports awards. Competition for these categories is becoming very tight with the steadily increasing numbers in St. Ailbe’s, over the past number of years. Winners on the evening included DJ Leopold, Stephen Ryan, Alex Cummins, Eoin O’Shea, Abi Ryan and Grace Hogan. In the Senior category, Molly Ryan, Sinead O’Brien and Emily Phelan were to the fore. (A full list of recipients can be found on our website).

Further winners in the Arts, Entrepreneurial and leadership sections were presented prior to the Excellent Attendance awards. One of the biggest cheers of the night was reserved for sixth year student, Aaron O’Reilly, who was presented with the gold medal award and certificate for his unblemished attendance record during his six years at St. Ailbe’s.

Parents’ Council representative, Ms. Catherine Heffernan, was on hand to present the Friendship award to one recipient from each year group. The Friendship award is presented to students to recognise their sense of comraderywith their peers throughout the school year. DJ Leopold, Joshua Hartnett, Darragh Healy, David O’Dwyer, Maria Francesco Mondino and Denis Shastakwere called upon to receive this prestigious award.

St. Ailbe’s Chairperson of the Board of Management, Ms Mary Hanna Hourigan, subsequently presented our newest category of decoration – the Core Values award. This accolade, is presented on behalf of the ETB, to a junior and senior student, who are deemed to represent the Ethos/culture of St. Ailbe’s, at its best. Values such as the pursuit of excellence, care and respect for all, commitment to the school community and a belief in treating all members equally, were the criteria for selection. It was strongly felt that both recipients – Evan Ryan and Matthew Kavanagh, exemplified these traits in abundance, throughout their time in St. ailbe’s.

The penultimate prize, St. Ailbe’s Sportsperson of the year, was then announced and it came as no great surprise, when one of our most athletic and gifted sportsmen, Thomas O’ Mahoney was presented with this honour.

Finally, it came to the big one – the Student of the Year. Again, few in the huge audience could have been surprised when Rory Sampson’s name was called out. Rory has been an exemplary student, both in academia, but more significantly, as a person and role model to just about everyone else in our school community. Rory proved a most popular recipient and it was an emotional occasion for all in attendance, in particular, for his very proud parents, Joseph and Mary.

School Principal, Mr. Devitt, thanked the students, parents and staff for their commitment and hard work throughout the school year and wished all those sitting the state exams the best of luck in the weeks ahead.

Congrats to all involved.

Despite the social distancing and attention to all covid related restrictions, a very warm and nostalgic atmosphere enveloped the final day in school for our outgoing Sixth Year group.This year’s graduation and annual awards ceremony was a far cry from the usual packed sport’s hall, when students, family and staff could reflect on the successes, highlights and memories of the previous year.

However, despite the Pandemic restrictions, our sixth year students did themselves proud, with a very poignant and positive reflection on their time in St. Ailbe’s. School Principal, Mr. Ruaidhri Devitt, paid tribute to the progress the sixth year group had made during those six years. Indeed, progress and taking care of oneself and others, were the general themes of all speakers, including Deputy Principal Mr. Kieran O’Dwyer, Sixth Year Year-head, Ms. Siobhan Hall and our school chaplain, Fr. Beatty. Well done to Ms. Hall and Ms. Collins for a wonderfully organised afternoon.

Finally, on behalf of everyone at St. Ailbe’s, we would like to thank this year’s Leaving Cert class for their immense contribution to school life and we wish them all the very best in their forthcoming exams and in their future lives.

This year, we once again took the opportunity to acknowledge our students who excelled during the course of the academic year. We take pride in everyone who comes through our doors and normally our awards cover a very extensive spectrum of categories. However, this year’s awards were, once again, curtailed due to covid restrictions.

In a very brief but significant ceremony, it was announced that our Junior Cycle Awards went to Darragh O’Sullivan (First Year), Zoe Ryan (Second Year) and Emma Roche (Third Year). These awards were an acknowledgement for the sustained high levels of work and achievement attained by these students throughout the year and especially during the course of the lockdown.

In addition to these, St. Ailbe’s awarded Conor Quinlan and Rory Sampson the 2020 Transition Year Students of the Year. Likewise, this year’s T.Y. Student of the Year went to the hard working and committed Ella Morrissey. All three students were recognized for their involvement and dedication to all the elements of a very broad transition Year programme.

Fifth Year, Rory Sampson was again honored for achieving top marks in his 2019 Junior Certificate exams, as was Karina Shastak, who also achieved fantastic results in her Junior Cert exams in 2020. Both students were very deserving recipients of this prestigious award.

Finally, when it came to our annual Student of the Year Award, Mr. Devitt spoke of the success criteria that influence the selection process every year.

Qualities such as leadership, work ethic, involvement in all aspects of extra-curricular life, courteousness towards staff and fellow students, attendance and punctuality, empathy and integrity, were all high up on the list when considering the overall winner. Several students were nominated, but it was no surprise when it was announced that this year’s Student of the Year had gone to Brid Nash. Once again, a very deserving recipient, we would like to congratulate Brid on her accomplishments and wish her the very best going forward.

Students of the Year including Sports Person

6th Years Musicals through the years

A major event at the end of the school year is the Awards Ceremony where students are presented with awards in various areas such as sporting, attendance, Student of the Year, etc. Trophies and certificates are presented in the various categories. 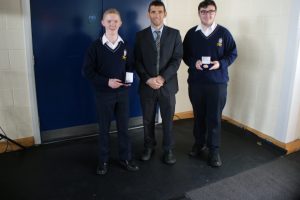 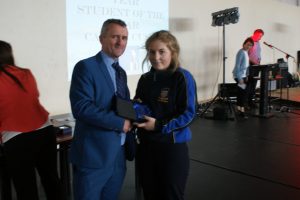 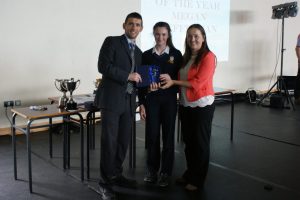 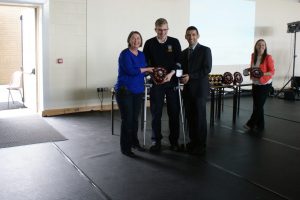 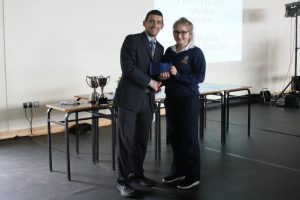 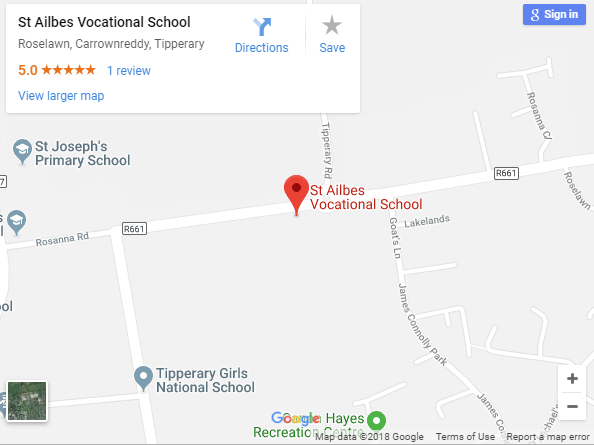